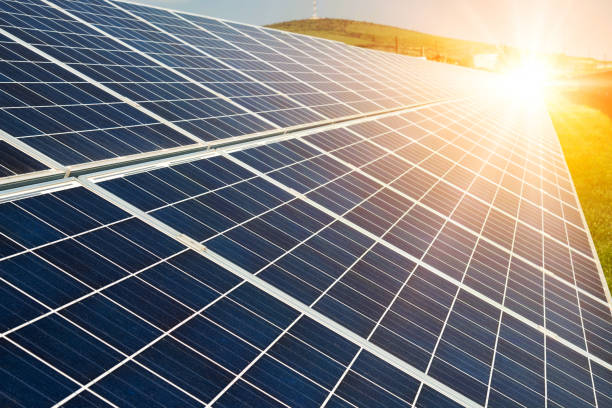 The origin of solar cells is conventionally attributed to Alexandre-Edmond Becquerel. In 1839 the French scientist observed the photoelectric effect, a phenomenon determined by the interaction of light and electricity, that is the ability of some semiconductor materials – properly treated – to generate electricity when they are exposed to light radiation.

From this discovery, photovoltaic systems were developed, which allow the transformation of solar energy into electrical energy.

The basic component of the photovoltaic system, the cell, consists of a thin sheet of semiconductor material where the transformation of solar radiation into electricity takes place. The photovoltaic modules on the market are a set of cells, while several modules connected in series constitute a solar panel, which is a single structure that can be connected to the ground or integrated into the exterior of a building. At the next level are the strings, which can be composed of several panels connected in series. Another key component of the photovoltaic system is the inverter, responsible for transforming the direct current produced by the cells into alternating current, ready to be used by end users. An important optional component is represented by the accumulation systems, which have the task of preserving and storing the excess energy produced by the photovoltaic system for the night hours or low irradiation. Increasingly, moreover, the performance of photovoltaic systems are controlled by special monitoring systems.

Another important distinction concerns the material used to make the cells: the main distinction is between monocrystalline or polycrystalline silicon. The first material has a high degree of purity and is generally more efficient, although it tends to be more expensive. An alternative is that of thin-film cells, which are composed of very thin layers of semiconductors deposited on low-cost substrates (glass, polymers, aluminum, plastic).

When is a photovoltaic system worthwhile

Generally speaking, it can be said that in a country characterized by a good level of radiation such as Italy, the investment in a photovoltaic system is destined to pay for itself over its useful life (20-25 years).

On the other hand, the availability of a solar plant allows immediately to reduce the expenses related to the purchase of electricity from the supplier and to increase its degree of energy autonomy, also ensuring the monetization of unused business space, such as roofs, parking covers and land not essential.

Not only that: the investment in photovoltaics, very often, is a factor driving vast incentive plans and efficiency projects. In addition, the investment in this technology, can be a lever to be used from the point of view of marketing and communication, as well as to strengthen relationships with partners and suppliers attentive to the issues of environmental sustainability.

SENECA proposal for photovoltaics ranges from signal converters, I/O modules and equipment for the transformation of electrical process quantities (DC currents, voltages, environmental information) to data acquisition (wire, bus and radio), from processing (PLC logic, datalogger, alarm management) to remote control via e-mail, SMS, web, Scada, IoT platforms and Cloud. SENECA modules and devices communicate via standard protocols ModBUS RTU/TCP-IP and CANopen, so they can also be integrated into systems of other manufacturers. SENECA designs and manufactures its products internally, so the customer can be followed from the initial phase of the project, responding to specific requests, up to the assistance in the implementation of the control center.

In the photovoltaic SENECA turns to companies looking for a solution distinct from the power management and a specialized partner.

The execution of the string panel proposed by SENECA typically adopts a copper/fiber optic converter for long distance data transmission ensuring the line a higher insulation than normal cable. SENECA’s partners can offer consultancy for the realization of the box and wiring. Blocks and graphic libraries of SENECA products are also available for the main electrical CAD. The modularity and the wide range of components always meet the actual need, so the user can design and assemble the string panels independently without having to impose any limit on the number of signals to manage. The compactness of the whole allows the installation even in pre-existing panels, without intervening on the power signals. The high degree of isolation between signals and power, makes SENECA solution among the most reliable and immune to disturbances available on the market. Finally, do not underestimate the role of non-intrusive and very compact current transducers: in fact, they can also be inserted into existing panels or structures without disrupting the power wiring, bringing out of these only the measurement signal.